Description of CVE-2020-0041 we reported to Google in December 2019, and the exploit for escaping the Google Chrome sandbox we wrote using this bug.

A few months ago we discovered and exploited a bug in the Binder driver, which we reported to Google on December 10, 2019. The bug was included in the March 2020 Android Security Bulletin, with CVE-2020-0041.

The bug along with some prerequisites on Binder internals were already described by Jean-Baptiste Cayrou from Synacktiv in this post right after the Android Security Bulletin was made public. Since we find the explanation and accompanying graphics in that post very clear, we will limit ourselves to the necessary code details in this post and refer interested readers to it for further information.

The vulnerability was caused by a logic error when computing the number of valid offsets that have already been validated by the driver.

In particular, when the binder driver is processing a transaction it walks through a number of offsets and validates and translates binder objects at each such offset.

Objects of type BINDER_TYPE_PTR and BINDER_TYPE_FDA can have a parent object, which must be one of the already validated objects. To verify this, the driver uses the following code:

The num_valid computations at [1] and [3] are incorrect, as the multiplication by sizeof(binder_size_t) should be a division instead. As a result of this error, an out-of-bounds offset can be provided as the parent of a PTR or FDA object.

Interestingly this error was only made during the sending path of a transaction, while the same value is correctly computed in the cleanup code.

Even though an out-of-bounds object offset seems immediately interesting, parent objects are still validated by the binder_validate_ptr and/or binder_validate_fixup functions before they can be used. Therefore, it is not possible to directly provide a completely arbitrary object.

Instead, we make use of the fact that the offset array is followed by so-called extra buffers or sg_buf in the transaction buffer, and that these buffers are copied into when a BINDER_TYPE_PTR is encountered ([2] in the code snippet above).

This is exactly the same approach identified by Synacktiv, and you can find a very graphical description in their blog post and slides.

Our exploit then performs the following steps to trigger this situation:

At this stage, the driver attempts to fixup the parent buffer with a pointer to the sg_buf data that has been copied in. This is done by binder_fixup_parent:

last_fixup_obj_off here refers to the object validated in step 3, and because it's been validated its parent offset is also implicitly trusted. Therefore the binder_validate_fixup call succeeds.

However, the contents at parent_offset have been modified while processing the latter BINDER_TYPE_PTR object, and now point to a fake object with completely controlled contents (parent in the snippet above).

We can thus provide an arbitrary buffer_offset at [1], which is then used to copy the address of the sg_buf at [2].

Note however that we require knowing the value of b->user_data in order for the copy to succeed. Even worse, in the code currently shipped with Pixel devices the following BUG_ON will trigger if it's incorrect, which will crash the kernel:

b->user_data is the address of the binder buffer where the transaction is being copied into in the address space of the recipient.

This value is trivial to learn if we are able to send a transaction to our own process, which is possible but requires using some tricks (we'll discuss one of those tricks in the coming posts). Additionally, in the case of the Chrome browser as currently released, this mapping is at the same address in the renderer and the browser process. Similarly, regular Android apps inherit from zygote or zygote64 and share a significant portion of their mappings.

Note also that instead of a BINDER_TYPE_PTR object we could use a BINDER_TYPE_FDA object in the last step. In that case, the driver would process an arbitrary part of the transaction as file descriptors, send them to the recipient and replace the file descriptor number.

This can also be used to corrupt arbitrary dwords, such as a validated object offset. This would allow injecting fully arbitrary objects into the transaction if required.

Using our memory corruption primitive we can overwrite parts of already validated binder transactions. Since these values are supposed to be read-only to anyone but the kernel, the rest of the system trusts them. There are two stages at which these values are used that we could target for our attack:

In this post we'll focus on what can be done when we target the userspace components, and in follow up posts we'll discuss targeting the kernel cleanup code.

The code responsible for unmarshalling data and objects from a binder transaction can be found in Parcel.cpp within libbinder. The following piece of code is executed when an object is read from a transaction:

From there we learn that if we corrupt the cookie field of a BINDER_TYPE_BINDER object, we will end up controlling the sp<IBinder *> pointer.

This means we can ask the service manager for handles to the Activity Manager, Display Service, WebView update service and Ashmem service. From what we could see, all these processes are 64-bits and we are in a 32-bit process. Therefore, it will be hard for us to even trigger the bug without hitting the BUG_ON check above unless we have an additional leak from these processes.

We thus turned to the binder handles already available to a regular Chrome renderer process. To identify them, we used the following piece of C code, which borrows utility functions from the AOSP service manager code:

Injecting this code into the renderer process on an Android 10 system provides the following output:

All these handles belong to 64-bit service processes, except for the IParentProcess which belongs to the Chrome browser. Luckily for us, this process is also running in 32-bit mode in current Chrome releases, and therefore we can target it. Taking a look at the interface definition is however somewhat depressing:

None of these calls is very interesting for our purposes, since there are no objects being passed around. However, if we dig deeper into how Binder objects are implemented we can find a solution to our troubles in the BBinder class that all (or most?) objects extend from:

Thus, in the above the IResultReceiver object would point to controlled data if we have overwritten its cookie field with the bug. In order to do so reliably, the exploit performs the following steps:

Thus, with this setup we end up with a Binder object pointing to controlled data inside the Binder mapping itself.

From fake object to shellcode execution

The fake object is casted to an IResultReceiver object, which ends up causing a significant amount of code to be executed. The first thing we need to ensure is that the code can acquire a strong reference on the object.

The pointer dereferenced at [1] must point to a writable address, and its contents must not be the special value 0x10000000 to avoid the call at [2].

The first part is problematic since our fake object is inside a binder mapping, which is always read-only for userland. In our exploit we set this pointer to a temporary buffer in the data segment of the libc. We can do this because we are already assuming that the target process mappings are very similar to our own, thus we can simply take our own libc address.

Once we get past this incStrong call, the code flows until the following indirect call:

The value of *myobj here matches that of our fake object, so we end up calling a function pointer from our fake object and passing the fake object address as a first parameter. Thus, with the following code we obtain code execution:

Additionally, since the binder mapping address is also the same on both processes, we can use this to compute the address of our own data in the target process.

Since the fake object is also passed as the first parameter, we pivot the stack to R0 using an ldm r0!, {r2, r5, ip, sp, lr, pc} gadget and start a ROP chain from the beginning of the object. The final setup looks as follows: 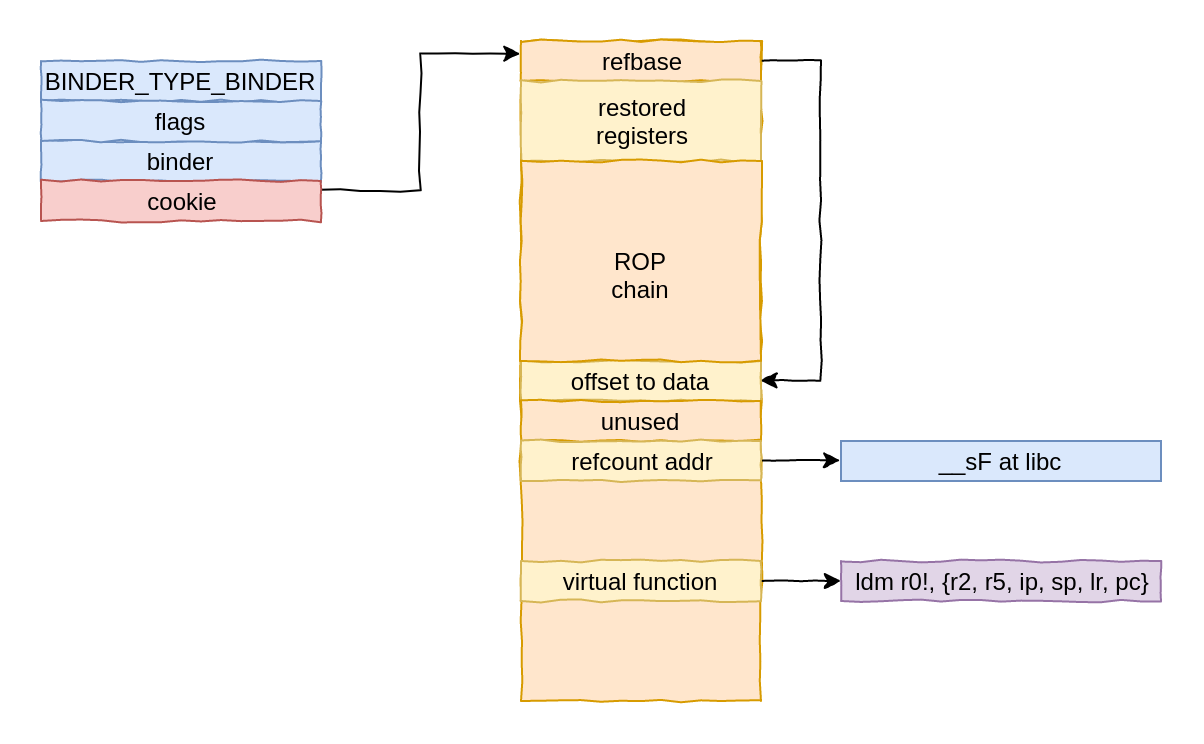 However, the fact that the mapping is read-only makes it impossible to call any functions that use the stack. For that reason, our ROP chain performs the following steps:

As soon as cacheflush returns we get shellcode execution and a proper read/write stack. In order to reduce the ROP chain size, we use a small initial shellcode that uses memcpy to copy the next stage into RWX memory, then calls cacheflush once again and finally jumps to it.

Now that we have unrestricted shellcode execution, we can execute any action required by our exploit and then fix up the Chrome process so that the user can continue browsing happily.

In order to achieve process continuation, our main shellcode connects back to 127.0.0.1:6666 and retrieves a shared library. The shared library is stored as /data/data/<package_name>/test.so and loaded using __loader_dlopen.

The __loader_dlopen symbol is currently resolved heuristically by the code injected to the renderer. This is required because the default dlopen prevents loading libraries from non-standard paths, so we follow a similar approach to that of Frida.

After loading the shared object, the shellcode restores the browser process state.

In order to do so, we use one of the higher stack frames that restores most registers from the stack. In particular, we use the copies of the registers stored by art_quick_invoke_stub in libart.so:

The renderer code parses the ArtMethod::Invoke assembly code and finds the return address for the art_quick_invoke_stub call. Then the shellcode looks through the stack to find the corresponding stack frame and restore all registers before returning.

However, just returning there results in the Art VM crashing at different points later on.

In order to fix this, we analyzed the crashing locations. The crashes we observed were related to garbage collection and occurred within this code:

At [1] we see offset 0xDC from the Thread object is checked against null. At the point where we are returning, r6 points to the current Thread * object.

Therefore, our shellcode gets the current Thread * value from the restored registers and clears this field before continuing.

The final recovery part of the shellcode looks as follows:

With this, the browser process continues executing cleanly after our shared object has been loaded. The shared object can thus perform any additional actions such as launching a background thread or forking and launching a reverse shell.

The following video shows the process of compromising the Chrome browser on a vulnerable Pixel 3 with the February 2020 patch level. On the top-left you see a root shell on the target device, which we use to inject our exploit into a renderer process. On the bottom-left you see the output of our exploit through logcat.

On the right, you see a display of the target device, where we show the target setup and start Chrome. After having started Chrome, we inject the shellcode using the root shell and almost immediately receive a reverse shell on the top-right part of the screen.

As you can see, the shell is running in the context of the browser process, and has therefore escaped the sandbox.

Code and next steps

You can find the code for the exploit described in this post in the Blue Frost Security GitHub. We provide the code as a set of patches for Chromium 78.0.3904.62 for demonstration purposes only.

In the next post, we will discuss how to attack the processing performed by the kernel in order to achieve a privilege escalation to root using this very same bug.